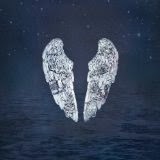 The story that unfolds in the "Magic" video (above) is played out as a silent film that also stars actress Zhang Ziyi as "a beautiful young 'magicienne'. source
Posted by CDMartini at 9:01 AM