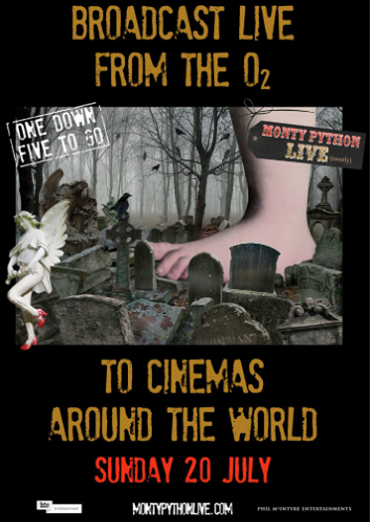 On July 20, 2014 the five remaining members of famed comedy group Monty Python will reunite for one last show, and you won't have to fly to the United Kingdom to watch. Due to popular demand, The Last Night of Monty Python will be streamed live to 1,500 theaters around the world.

Originally, members John Cleese, Terry Gilliam, Eric Idle, Michael Palin, and Terry Jones had intended to do just a pair of live shows in the UK for a final reunion — their first live shows since 1980 — but when tickets sold out in just 44 seconds, the group realized that there was a larger opportunity. They bumped the number to 10 shows, beginning July 1, 2014 and running through July 20, 2014 at London's O2 Arena. That very last performance is the one that will be broadcast to theaters in other countries, including but not limited to the United States, Russia, Australia, Sweden, and Poland. source