The Boss Gets On The Good Wife 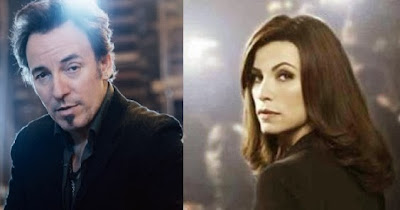 on their mobile site, CBS will offer a complete stream of the LP on their official website. It's part of a promotional tie-in with the legal drama The Good Wife, which will incorporate the new tracks "High Hopes," "Hunter of Invisible Game" and a rerecorded "The Ghost of Tom Joad" into a January 12, 2014 episode.

They will begin hosting the stream at 7 p.m. on January 5, 2014, shortly before a preview runs for the episode with the Springsteen music. source
Posted by CDMartini at 9:57 AM