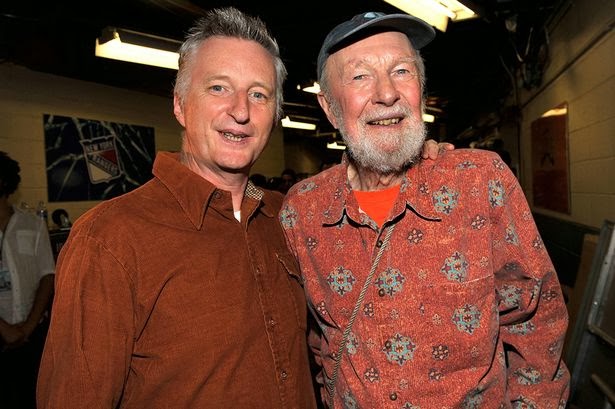 Billy Bragg (above left) and Rage Against The Machine guitarist Tom Morello have led the tributes to US folk musician Pete Seeger (above right), who has died aged 94.

Posting on Twitter, Bragg and Morello wrote of his Seeger's political influence: "Peter Seeger towered over the folk scene like a mighty redwood for 75 years," wrote Bragg. "He traveled with Woody Guthrie in the 1940s, stood up to Joe McCarthy in the 50s, marched with Dr Martin Luther King in the 60s. His songs will be sung wherever people struggle for their rights. We shall overcome." MORE HERE

Bragg spoke to BBC News about Seeger; the interview is HERE

The news of Seeger's death spread fast to social media, where fans of his music and activism went to pay tribute to the songwriter. MORE HERE