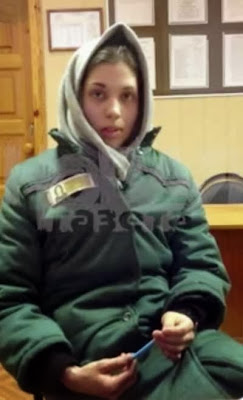 Jailed Pussy Riot member Nadezhda Tolokonnikova (above) has been found in a Siberian TB hospital more than three weeks since she "disappeared" during a prison transfer.

Ms Tolokonnikova's husband Pyotr Verzilov confirmed he had learned that his wife was in Regional Tuberculosis Hospital No 1 after a tip off from a prison guard. She is not thought to be suffering from the disease.

Nadia is expected to be placed in IR-50 in the village of Lower Ingash in the Krasnoyarsk Region after being release for tests at a TB hospital is city of Krasnoyarsk. Due to complications with her hunger strike, prison officials placed her in a TB hospital for tests.

After 26 days with out communication with family or lawyers Nadia's condition seems to be fair. MORE HERE  & HERE

free pussy riot
Posted by CDMartini at 10:51 AM