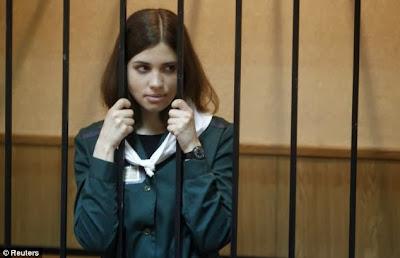 Pussy Riot's Nadezhda Tolokonnikova has ended her nine-day hunger strike. Although deteriorating health forced Tolokonnikova to halt her protest against prison conditions, her husband has said that she will resume the strike if she is not transferred away from Mordovia's Penal Colony No 14.

On Tuesday, Russia's Federal Penitentiary Service revealed that Tolokonnikova is again receiving food, two days after she was moved to a prison hospital. According to state news agency RIA Novosti, the 23-year-old is in a stable condition and receiving diet food over a drip.

Meanwhile, members of the Russian Presidential Human Rights Council have published a report confirming several of Tolokonnikova's claims about conditions at Penal Colony No 14. As stated in her open letter from September 23, 2013, many prisoners work as many as 16 hours per day, contrary to the eight-hour legal maximum, and are underpaid for their work. MORE HERE & HERE