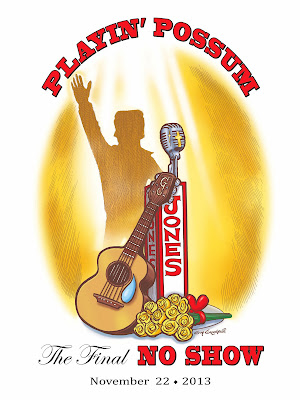 Music giants from George Strait and Garth Brooks to Sam Moore and Megadeth (yes, Megadeath) were among a whopping 112 artists who turned out to honor the late, great George Jones Friday night (November 22, 2013) at a concert co-host Charlie Chase called "the largest tribute event in music history."

Clocking in a few minutes shy of the four-hour mark and boasting a set list spanning nearly 50 songs, the Opry-style marathon of duets, touching tributes and all-star jams – cleverly billed as Playin’ Possum! The Final No Show – was originally announced over a year ago as Jones’ star-studded farewell concert. But that changed in April (2013), when the country legend died at the age of 81. MORE HERE, HERE, HERE & HERE