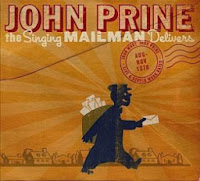 , the first true archival release from John Prine, is a collection of early takes of the songs that would largely make up his self-titled debut. One half of the double-disc set is a collection of demos recorded at a radio station, the other a performance at Chicago’s Fifth-Peg. MORE HERE

Prine says that doctors found the cancer early and "see no reason why I won't fully recover." The cancer is not related to the squamous cell cancer on his neck for which he was treated in the mid-1990s. MORE HERE