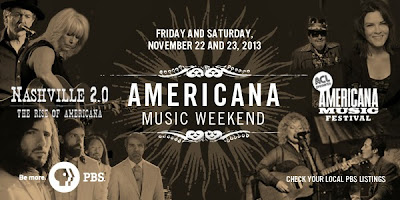 As part of a special "Americana Music Weekend," PBS is debuting a bunch of performances from roots music artists. The good times kick off Friday November 22, 2013 with a documentary called Nashville 2.0: The Rise of Americana. Among those who appear: Dwight Yoakam, Emmylou Harris, The Avett Brothers, Billy Bragg, Alabama Shakes, Mumford & Sons, Richard Thompson and the Carolina Chocolate Drops.

Learn more about the weekend at americanamusic.org and ACL's website. Check PBS.org for channel/time info. source
Posted by CDMartini at 10:38 AM