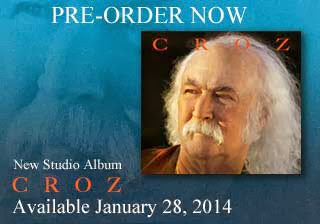 After a twenty-year break, David Crosby is returning to his solo career with the release of Croz, an eleven-track LP he made with help with from his son James Raymond and co-producer Daniel Garcia. The new album is due out January 28, 2014. "I wanted to challenge myself," he says. "Most guys my age would have done a covers record or duets on old material. This won't be a huge hit. It'll probably sell nineteen copies. I don't think kids are gonna dig it, but I'm not making it for them. I'm making it for me. I have this stuff that I need to get off my chest." MORE HERE

Croz will come out as a digital and physical release on Blue Castle Records, the label Crosby co-founded with Graham Nash in 2011. In support of the release, Crosby and his touring band are performing a series of concert dates in early 2014. Fans will be able to pre-order the album—and receive a free bonus track—when they purchase tickets. MORE HERE

The album kicks off with "What's Broken," which features Mark Knopfler on guitar (streaming below).