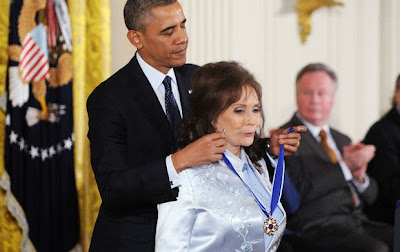 President Barack Obama honored 16 prominent Americans including country music legend Loretta Lynn (above) with the Presidential Medal of Freedom, the highest award the U.S. gives a civilian, on Wednesday November 20, 2013 .

The ceremony at the White House opened a day of tributes to former President John F. Kennedy, who established the modern version of the medal but was assassinated 50 years ago this week as the first award ceremony neared. MORE HERE & HERE