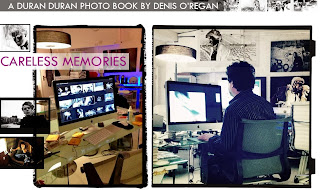 
The book contains hundreds of exquisitely restored, previously unseen photographs, taken mostly during the North American and Japanese legs of the band’s tour.

An exhibition of photographs from the book will be on display at a dedicated pop-up store, at 15 Foubert’s Place, off Carnaby Street, in Central London, (not far from the band’s original 1984 office) from November 20 to December 6, 2013. The night before the exhibition closes, members of Duran Duran, Denis O’Regan and Intense will host a launch event for ‘Careless Memories’, with the proceeds of a silent auction that will run throughout the life of the exhibition, going to the Ace Africa charity. MORE HERE & HERE