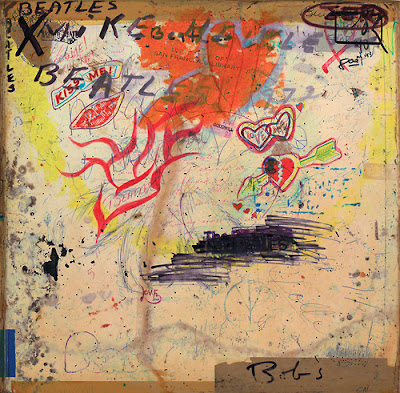 When the conceptual artist Rutherford Chang presented his idiosyncratic art show “We Buy White Albums” at the Recess Gallery in SoHo in January (2013), he said that the exhibition was only part of the project. The exhibition seemed plenty, really: Mr. Chang transformed the gallery into a mock record shop in which the only discs on display were copies of “The Beatles” — the 1968 double-disc set popularly known as the “White Album” because of its stark cover.

Now, in time for the 45th anniversary of the album’s release on Friday November 22, 2013, Mr. Chang has completed the project’s audio component. While listening to each copy of the “White Album” he collected, Mr. Chang made a digital recording. He then overlaid 100 of them, and pressed them as a vinyl set, with a cover (above) on which some of the more colorful examples of former-owner artwork were overlaid as well. He has posted Side 1 on his web page (and it's below), and said he would sell copies at the WFMU Record Fair . source