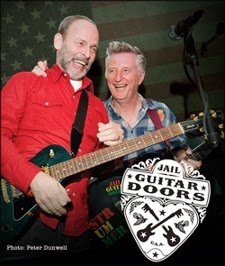 In the world of politically charged rock and roll, Billy Bragg and Wayne Kramer are iconic in their own right. The two musician/activists came together in 2009 to form Jail Guitar Doors, a non-profit organization that provides musical instruments and opportunities to help rehabilitate prisoners. Their name comes from a 1977 song by The Clash called "Jail Guitar Doors," which detailed the imprisonment of their hero, the MC5's Wayne Kramer.

After their performance, the two sat down with Amoeba's crew for another episode of What's In My Bag?. MORE HERE
Posted by CDMartini at 10:09 AM