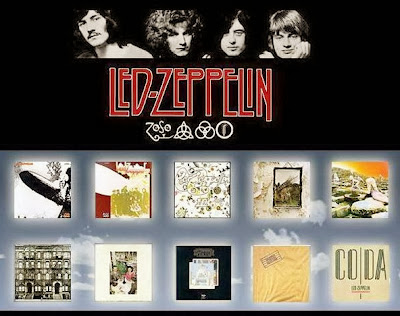 Rumors about a series of reissues from Led Zeppelin have been circulating for well over a year, but it looks like this will finally became a reality in 2014. Expanded and remastered versions of some of the band's classic LPs are due to drop soon, according to guitarist Jimmy Page.

Although fans were hoping to get their hands on all of the new Led Zeppelin remasters this year, the wait for the majority of the band's catalog continues.

Jimmy Page posted an update on his web site, stating, "The first of the Led Zeppelin reissues — comprising of 'Led Zeppelin I

The wait for 'Led Zeppelin IV

', 'The Song Remains The Same

', 'In Through the Out Door

Email ThisBlogThis!Share to TwitterShare to FacebookShare to Pinterest
Labels: coda, houses of the holy, in through the out door, jimmy page, led zeppelin, physical graffiti, presence, the song remains the same