McCartney & Starr Come Together For Grammys 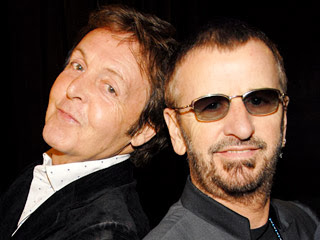 The 56th annual Grammy Awards will host a live Fab reunion. Paul McCartney and Ringo Starr will perform at the ceremony, set for January 26, 2014 at Los Angeles' Staples Center, the Recording Academy announced.

McCartney and Starr will be receiving a Lifetime Achievement Award with the Beatles. They last performed together for Starr's 70th birthday in 2010 at New York City's Radio City Music Hall.

Sir Paul also has a Best Rock Song nomination for "Cut Me Some Slack," his song with Nirvana's surviving members. He's up for Best Music Film for concert movie Live Kisses, too. MORE HERE

Ringo Starr official website
Posted by CDMartini at 10:18 AM