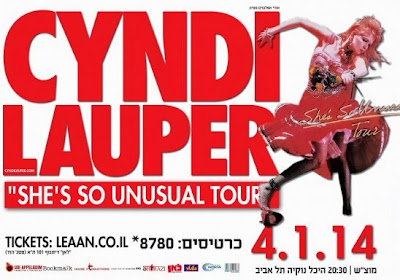 Cyndi Lauper is performing in Tel Aviv tonight (January 4, 2014). Some are perplexed (including Roger Waters), but Lauper seems to have an agenda that may answer those calls.

In Tel Aviv on Friday (January 3, 2014) she took some time to get serious for her signature cause, the issue of gay rights.

Lauper, a longtime gay rights activist, paid a visit to the city’s LGBT Community Center. There, she met with some of the city’s leading queer activists, including representatives from the religious LGBT community; Hoshen, the education and information center of the community; and the nation’s Gay youth organization. MORE HERE

Also... Ahead of her performance, the pop icon stops by music school to sing with students. MORE HERE