Allman Brothers Play All Night At The Beacon '92 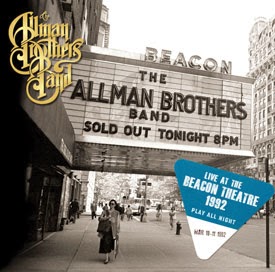 This year marks the 45th anniversary of the Allman Brothers Band, and the band will celebrate by returning to the Beacon Theatre for 10 shows beginning March 7, 2014.

The band will also celebrate with multiple archival releases. The searing take of "Statesboro Blues" (below) will hit shelves as part of Play All Night: Live at the Beacon Theater 1992