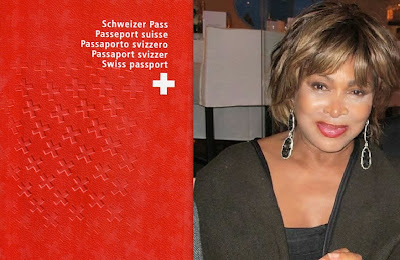 The 73-year-old Turner, affirmed in the documents that she does not have strong ties to the United States, "except for family, and has no plans to reside in the United States in the future".

The soul singer, who was born in Nutbush, Tennessee, on November 26, 1939, has lived in Switzerland for more than two decades and married her long-time boyfriend, German producer Erwin Bach, in July (2013).

Turner, who has won eight Grammys and sold more than 100 million records in her career, became a Swiss citizen on April 10, 2013. MORE HERE & HERE
Posted by CDMartini at 9:56 AM