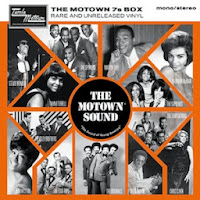 Reports that a previously unreleased (on vinyl) Stevie Wonder song will get a vinyl release as part of Universal Music Catalog's deluxe Motown box set coming out November 18, 2013.

The set features fourteen rare tracks on seven reproduced 45s. The Motown 7″s Box – Rare and Unreleased Vinyl will have several tracks on the format for the first time since they were originally released, including songs from Marvin Gaye, The Four Tops, Tammi Terrell and David Ruffin.


The Wonder song is called "Just Enough To Ease The Pain" (above) is out on vinyl for the first time (available on The Complete Stevie Wonder box set), along with "Do I Love You" by Frank Wilson, which was pulled after its release in 1965. An original release recently sold for over $25,000. MORE HERE
Posted by CDMartini at 10:13 AM