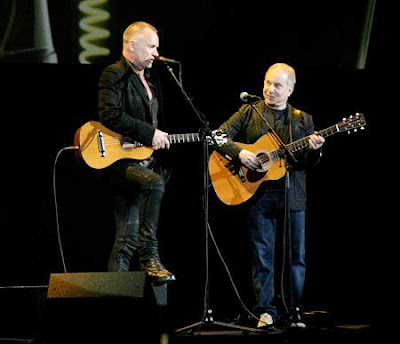 Paul Simon is a name usually followed by another seasoned musician, Art Garfunkel. But the singer-songwriter is teaming up with an unlikely partner, Sting, for an 18-show tour beginning in February (2014).

The pair plan to announce their North American tour, “Paul Simon & Sting: On Stage Together,” on Tuesday November 5, 2013, the New York Times reports.

The duo will play 18 shows beginning Feb. 8 through March 16 (2014), with additional dates still possible. Tickets go on sale Wednesday November 6, 2013 on sting.com and paulsimon.com. source
Posted by CDMartini at 9:25 AM