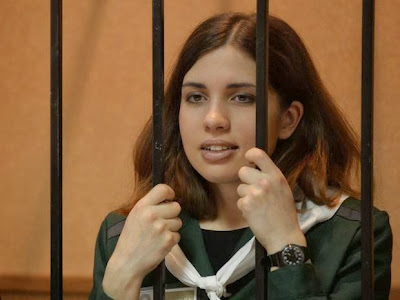 Russian officials appear to have finally revealed the whereabouts of incarcerated Pussy Riot member Nadezhda Tolokonnikova, whose disappearance three weeks ago led to an appeal for information from her family.

Russia's human rights ombudsmen Vladimir Lukin confirmed Tolokonnikova husband's fears that she would be moved to a penal colony in the depths of Siberia in a statement (in Russian) released on Tuesday (November 12, 2013).

The statement said Tolokonnikova will be transferred to a prison colony in the Siberian province of Krasnoyarsk after she complained about the Mordovia prison she was being detained in.

In an open letter, she described the conditions as "slavery-like", saying she was forced to work 16 to 17 hours a day and regularly got less than four hours sleep. She said they were regularly not allowed to urinate as well as suffering verbal abuse and harassment. Punishments for violating these rules were harsh and humiliating.

On September 23, 2013 she went on hunger strike to protest against her treatment. MORE HERE