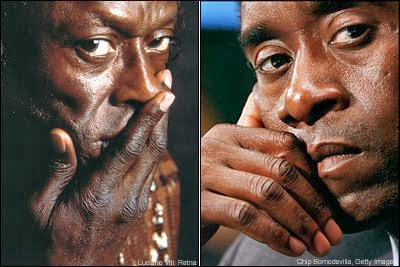 Don Cheadle (above right) will portray Miles Davis (above left) and make his directorial debut in a long in-the-works biopic about the famed, groundbreaking jazz musician.

Unlike most biopics, Kill the Trumpet Player will not cover Davis' entire life and career; rather, it will focus on his brief hiatus from music between 1975 to 1979. Co-written by Cheadle and Steve Baigelman, the movie will co-star Ewan McGregor as a Rolling Stone reporter and Zoe Saldana as Davis' former wife, Frances.

Cheadle has been looking to make Kill the Trumpet Player for years, and now that he's received backing from BitFrost Pictures, the film will begin production in June (2014). MORE HERE & HERE
Posted by CDMartini at 9:43 AM