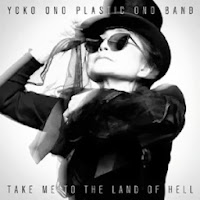 It turned out: for the first single from her new Plastic Ono Band album Take Me to the Land of Hell

, Ono and director Ben Dickinson decided to run with the song's title. With only a few days' planning, Yoko reached out to a wide range of artist friends in New York and asked them to drop by a soundstage in Brooklyn to bust out their geekiest, most expressive dancing for the cameras. MORE HERE & HERE