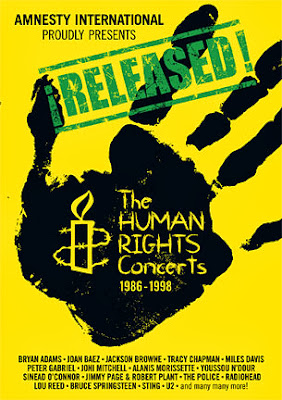 featuring four shows from their historic Human Rights Concerts series that spanned from 1986-1998.

This new concert film distills highlights from the legendary Amnesty International concerts 1986-1998, including stirring performances and unique collaborations by Bruce Springsteen, U2, The Police, Jimmy Page & Robert Plant, Lou Reed and many more.

The world premiere was held November 3, 2013 at American Cinematique in Santa Monica California. The screening was followed by a discussion with The Police band members Andy Summers and Stewart Copeland and ¡RELEASED! producer Martin Lewis (co-creator/producer of Amnesty’s “Secret Policeman’s Ball” series). MORE HERE & HERE
Posted by CDMartini at 8:17 AM