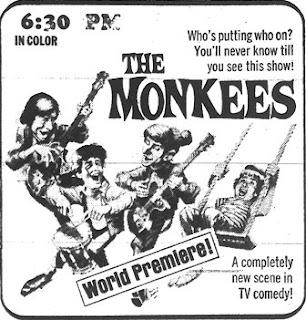 September 12, 1966 : The Monkees TV show makes its debut, with 4 actors chosen to portray a pop band based on The Beatles. While The Monkees are a fictional band, they become very real, and eventually play on their own recordings instead of studio musicians.

Watch the pilot episode and more HERE
Posted by CDMartini at 8:44 AM

Email ThisBlogThis!Share to TwitterShare to FacebookShare to Pinterest
Labels: the beatles, the monkees