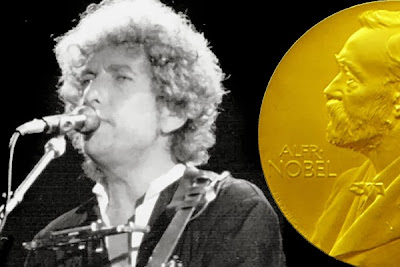 Since 1996, Bob Dylan has been nominated every year for the Nobel Prize in Literature.

After President Obama recently presented him with the Presidential Medal of Freedom - the United States' highest honour, many hoped the Swedish Academy would follow suit.

There are dissenting voices among Dylan admirers, who hold his work to be sufficiently unique as to make a Nobel Prize superfluous; others have argued that while Dylan may not need the Nobel Prize, the Nobel Prize needs Dylan. MORE HERE & HERE
Posted by CDMartini at 10:24 AM