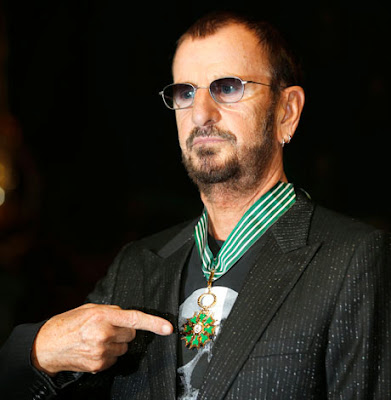 Beatles drummer Ringo Starr has joined one of the art world's most exclusive clubs after being appointed a Commander of France's Order of Arts and Letters.

The 73-year-old received the award in Monaco, where an exhibition featuring two of his paintings has opened. He joins an exclusive club that includes actor Sir Sean Connery, singer David Bowie and the late Irish poet Seamus Heaney.

The award ceremony took place in front of the Oceanographic Museum in Monaco, where the exhibition showcasing the hidden passion for art of various famous people is being held.
It also features works by Starr's fellow Beatle Sir Paul McCartney as well as Bob Dylan. MORE HERE & HERE
Posted by CDMartini at 9:18 AM