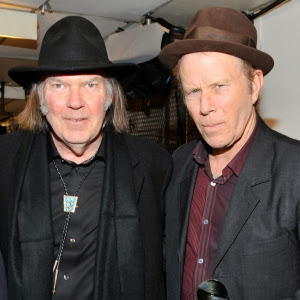 Tom Waits will give a rare live performance as this year’s Bridge School Benefit, set for October 26 & 27, 2013 at Shoreline Amphitheatre in Mountain View, California.

The two-day, all-acoustic concert, curated by Neil Young, also promises performances by a reunited Crosby, Stills, Nash & Young...plus : Queens of the Stone Age, My Morning Jacket, The Killers, Elvis Costello, Jenny Lewis, Heart, Diane Krall, and Fun. While a majority of the acts will appear both days, Waits himself will perform only on Sunday, the 27, 2013.

Waits, who hasn’t toured since 2008, announced his addition to the lineup on Saturday night (September 21, 2013), saying in a statement : ”I had every good intention to stay home and work on my JD Salinger Halloween mask, but when Neil told me yesterday he was serving burnt cow’s eyes on a flat tire and it’s all gluten free, I invited myself!”

Waits’ added that he’ll perform a full acoustic set featuring songs from his latest album, Bad As Me