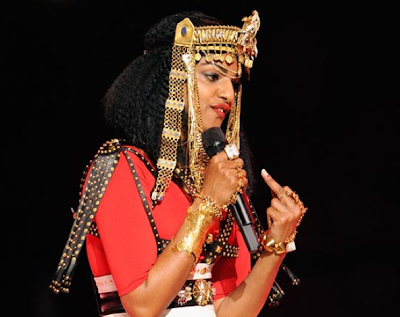 You may have forgotten about M.I.A. flashing the middle finger during her Super Bowl halftime performance in 2012, but the NFL certainly hasn’t.

On February 5, 2012, nearly 167 million TV viewers tuned in to Super Bowl XLVI to watch a matchup between the New York Giants and New England Patriots. Besides the football action, what had people talking that day was a halftime performance by Madonna that included M.I.A. and, specifically, how she extended her middle finger during the performance while mouthing, "I don't give a shit."

But the NFL did give a shit. One month after the performance, the league initiated legal proceedings against the English-Sri Lankan rapper-singer. The NFL filed a motion against the musician in March 2012, attempting to have her pay $1.5-million for breach of contract. M.I.A., however, has not responded favourably to the motion, and as the NFL prepares move to trial for damages, M.I.A.’s lawyer says the singer is ready for war. MORE HERE & HERE
Posted by CDMartini at 10:39 AM