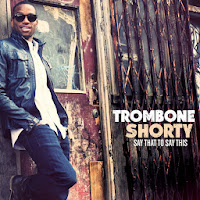 Growing up in New Orleans, Troy "Trombone Shorty" Andrews always wanted to be a part of the Meters, the city’s pioneering funk band. So when he reunited the collective for his new album, Say That to Say This

, it was a historic moment for him and the Crescent City – but an idea that needed a lot of convincing.

The '70s incarnation of the Meters line-up of Art and Cyril Neville, Zigaboo Modeliste, Leo Nocentelli and George Porter Jr. hadn’t recorded in the studio together since 1977's New Directions

. The record was co-produced by Raphael Saadiq, who brought his vintage mentality to the sessions. source

Check out the track Fire & Brimstone...