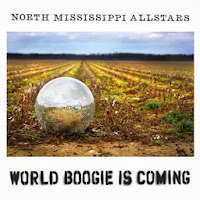 Robert Plant has lent his blues harp chops to a new project from the North Mississippi Allstars.

The former Led Zeppelin frontman made a surprise appearance at a recent recording session the band was holding at Memphis’ famed Royal Studios back in July (2013).


“It was unexpected,” studio owner Boo Mitchell said.  The Allstars’ Luther and Cody Dickinson had opened shows for Plant in the past and they had discussed the idea of working together without making specific plans.  But with both the Allstars and Plant in town for gigs, the time apparently seemed right for the Rock and Roll Hall of Famer. source

is out and the track - Goat Meat - featuring a guest appearance from Robert Plant on harmonica duties is below...