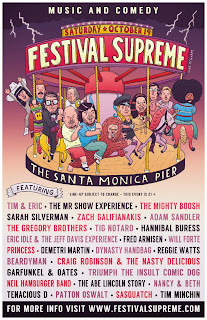 In the pantheon of musical comedy, very few artists have matched the kind of widespread success achieved by Tenacious D.

Since starting out in the early nineties, the hard-rocking duo of Jack Black and Kyle Gass have released a platinum-selling debut album, an acclaimed feature film and a short-lived HBO series.

Since their third album Rize Of The Fenix

last year, Gass and Black have mostly focused on touring – but they are thrilled about their inaugural musical comedy festival, Festival Supreme, set to take place on Saturday, October 19, 2013in Santa Monica.