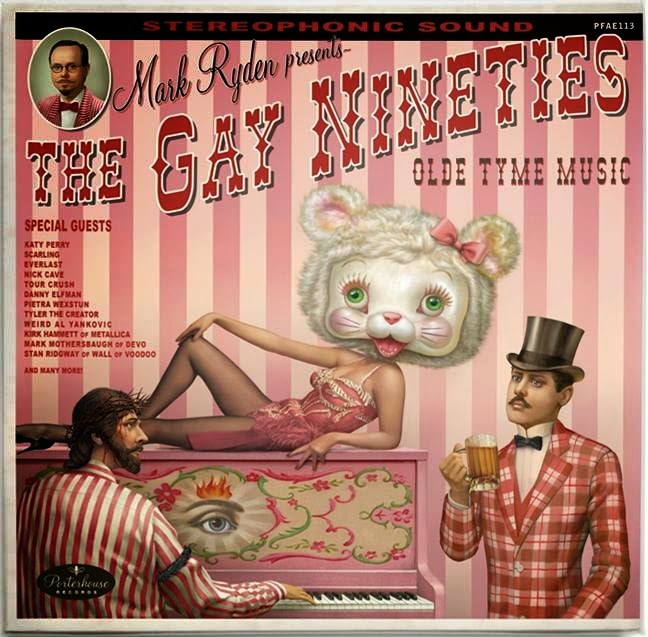 Mark Ryden, the artist known as the "Godfather of Pop Surrealism", has opened an exhibit of his work based around a theme of "The Gay 90's" at the Kohn Gallery in Hollywood and as a tie-in with the show, will release a limited edition (999 copies) album called The Gay Nineties Old Tyme Music: Daisy Bell (pictured above).

The album includes a number of different artists, old and new, performing their versions of the same song, Daisy Bell (Bicycle Built For Two), written by Harry Dacre in 1892. Over the years, the song was a hit on a number of occasions and holds the distinction of being the first tune sung by a computer, an IBM 704 in Bell Labs (1961). That fact was used by Arthur C. Clarke in his book 2001: A Space Odyssey as the villain computer HAL sings the tune as he shuts down.

Those performing their renditions of Daisy Bell on the album include Kirk Hammett of Metallica, Nick Cave, Stan Ridgway of Wall of Voodoo, Mark Mothersbaugh of Devo, Danny Elfman, Weird Al Yankovic, Tyler the Creator, and Katy Perry, whose likeness in one of the artist's paintings is in the Gay 90's exhibition.

The album, printed on 180 g red vinyl, is limited to 999 copies, all hand-numbered and signed by Ryden. Half of the records were sold at the gallery when the show opened (May 3, 2014) and half will be sold on the artist's website, beginning May 13, 2014. The proceeds from the record, which will sell for $99.99, will benefit Little Kids Rock, a nonprofit that supports musical education in disadvantaged elementary schools. MORE HERE
Posted by CDMartini at 7:53 AM