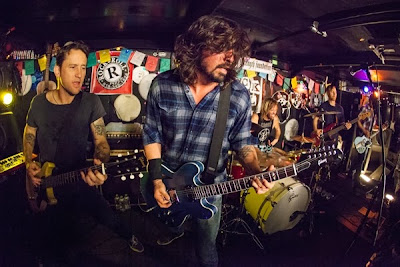 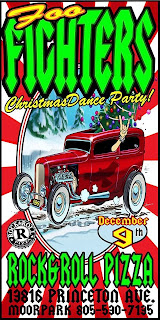 With Foo Fighters' first full concerts in more than a year scheduled for this week in Mexico, Dave Grohl and Co. pulled a pre-emptive move and rocked an L.A.-area pizza joint for a warm-up show Monday night December 9, 2013.

The band crowded onto the compact stage at Rock & Roll Pizza in Moorpark, California, where they played a 23-song set, including "Learn to Fly," "White Limo," and "Arlandria," which are featured in a pretty decent fan-shot video clip.

The venue is small enough that Taylor Hawkins didn't need to mic his drums, and Grohl sang and played guitar mere inches away from fans who made their way up front.

Foo Fighters are scheduled to perform with the National Wednesday December 11 and Friday December 13, 2013 at Foro Sol in Mexico City. MORE HERE