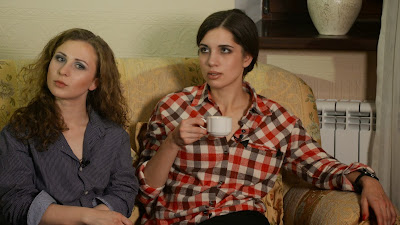 Nadezhda Tolokonnikova (above right) and Maria Alyokhina (above left), the two recently freed Pussy Riot members, don’t rule out art or political activities at some point, but plan to focus on prisoners’ rights protection in the immediate future. They also stressed that they have no plans of capitalizing on the Pussy Riot brand or even using it in the future.

Tolokonnikova and Alyokhina said they will form a non-governmental human rights organization, “Zona Prava” (“Justice Zone”), focused on protecting prisoners’ rights. They also hope to collaborate with former tycoon Mikhail Khodorkovsky, who was released last week after ten years in prison, but rule out taking money from him.

Tolokonnikova also said the rockers still wanted Russian President Vladimir Putin out of power, adding she would like freed ex-tycoon Mikhail Khodorkovsky to stand in elections and replace him. MORE HERE & HERE
Posted by CDMartini at 9:01 AM