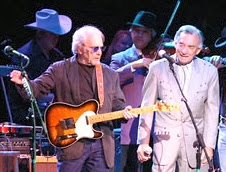 Merle Haggard can still remember the first time he heard Ray Price's voice come out of the radio, fronting Lefty Frizzell's band on "If You're Ever Lonely Darling" in 1951. And the memory of hearing "I'll Be There" for the first time in 1954 still makes him break out into song.

More than a decade later Haggard opened for Price on a 90-day run and the two formed a friendship that would last almost five decades. Haggard took time Tuesday (December 17, 2013) to talk about his early influence and longtime friend, a day after his fellow Country Music Hall of Fame member passed away at 87 at his Texas home. Haggard says Price's music, and his independent spirit, were always inspirational. MORE HERE

Also... An Appreciation: Country music legend Merle Haggard remembers his mentor Ray Price with pride and fondness HERE
Posted by CDMartini at 11:50 AM

Email ThisBlogThis!Share to TwitterShare to FacebookShare to Pinterest
Labels: country music hall of fame, i'll be there, if you're ever lonely darling, lefty frizzell, merle haggard, ray price