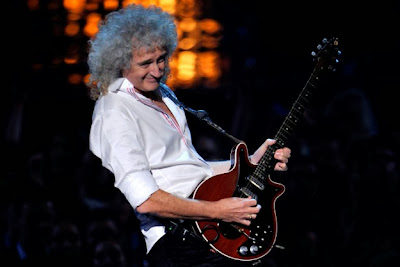 Back in August (2013), Brian May underwent knee replacement surgery.  Now, unfortunately, the Queen guitarist is dealing with some new health problems.  The 66-year-old rocker recently revealed via his Twitter account that he’s been diagnosed with “two torn discs” in his back that are “pressing on a nerve.”

In September (2013), May started to have some fairly serious pain in his “backside”. He worked through the problems but found they had gotten severe enough by mid-December (2013) that he could no longer stand for any length of time.

May’s doctor sent him for an MRI which is when things started to fall apart. The scans showed up all kinds of mechanical disc and vertebra problems that might be the cause of the pain, but there were also some abnormalities in the bones.

The good news is, after more tests, there is no evidence of cancer in the abnormalities. MORE HERE

Posted by CDMartini at 8:06 AM