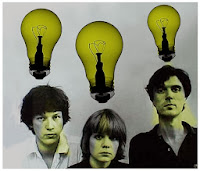 Recorded live at CBGB's in New York City on July 30, 1976. Talking Heads (still a trio at that time) (left) and Television both played two sets that night - this recording is from the second Talking Heads set. This track was never released in any form. This unreleased, instrumental Talking Heads track was played live only a few times back in 1976.