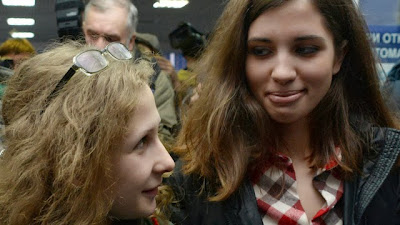 Two members of the Russian punk band Pussy Riot were reunited on Tuesday December 24, 2013 after spending nearly two years in prison for their protest at Moscow's main cathedral, and said they want to set up a human rights organisation.

Nadezhda Tolokonnikova (above right) and Maria Alyokhina (above left) were granted amnesty on Monday December 23, 2013, two months before their scheduled release, in what was interpreted as an attempt by the Kremlin to soothe criticism of Russia's human rights record prior to the Winter Olympics in Sochi in February 2014. MORE HERE & HERE
Posted by CDMartini at 9:41 AM