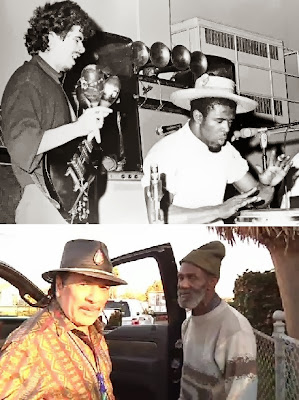 While shooting a report on illegal dumping in Oakland, Roberts interviewed a homeless man named Marcus Malone, who, Malone said, was an original member of Carlos Santana's blues band, but had gotten thrown in jail just before Woodstock, and just before the band caught its break.

Marcus Malone, or "Marcus the Magnificent," played drums for Carlos Santana's band in the 60's, adding an African rhythm to what made the band's Latin fusion so special. In 1969, just before the band's explosion of popularity at Woodstock, Malone went to San Quentin Prison, never to rejoin the band. He has had a hard life ever since.

On meeting Malone, Carlos Santana was overwhelmed with joy and rushed to embrace him. “That’s him man. That’s magnificent Marcus Malone,” he said, according to media reports. “His spirit is indomitable.”

“I want to offer him a place to stay in an apartment, get him some clothes and just get him out of the street,” Santana told CNN. Kron4's cameras captured the emotional moment of their reunion on Friday December 20, 2013.

Santana told Kron4 that he had tried looking for Malone but, unfortunately, was unable to track him down. He also added that he would soon bring Malone into the recording studio with him. MORE HERE & HERE