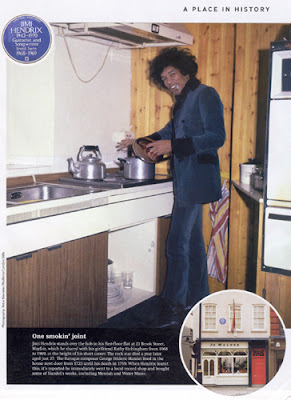 A permanent museum is to be created in a bland office space in a London attic. They are rooms that rock music pilgrims have been pleading to get into for decades – the rooms rented in the late 1960s by Jimi Hendrix, poignantly described by him as "the only home I ever had".

The Heritage Lottery Fund will soon announce a £1.2m grant to restore the rooms to their appearance during 1968, when Hendrix paid £30 a week to share the flat with his girlfriend, Kathy Etchingham. The rooms will hold displays on his life, work and musical legacy.

A unique pair of blue plaques on the outside wall of the 18th-century listed building celebrates the two musical giants whose time there was separated by centuries: Hendrix lived at No 23 Brook Street, and George Frideric Handel at No 25. The Mayfair properties, separate houses when constructed in 1721, are now linked as the Handel House Museum. MORE HERE & HERE
Posted by CDMartini at 8:27 AM