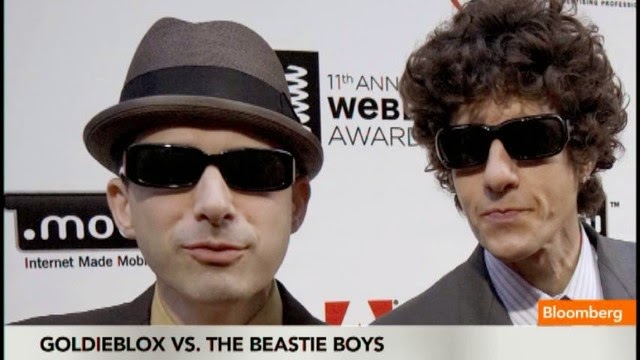 Ending a legal battle that started with the release of a wildly popular viral video, Oakland toymaker Goldieblox has settled a legal action the company filed against representatives of hip-hop superstars Beastie Boys.

No details of the settlement were released, but legal paperwork with both sides agreeing to the dismissal of a claim filed against the band was posted online by San Francisco copyright attorney Naomi Jean Gray. The agreement to dismiss was filed Monday in U.S. District Court in San Jose, California.

A video released by the toy company last year repurposed the group's 1986 song "Girls" as an anthem celebrating girls' interest in science and engineering, with new lyrics sung over a video of girls building an elaborate toy machine.

The video gained more than 8 million views in a week, but also drew complaints that the Beastie Boys' music was being used to advertise the company's product without the band's permission.

Posted by CDMartini at 9:43 AM