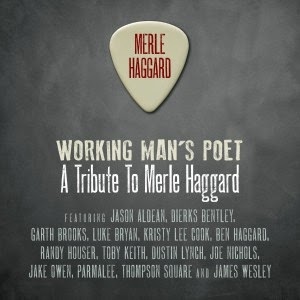 Broken Bow Records -- a label that has gained a reputation in Music City for their unique and trend setting ways of doing things -- will soon be paying tribute to a country music legend who has done things in his own trailblazing way for over five decades, Merle Haggard.

On April 1, 2014, the label will release "Working Man’s Poet: A Tribute To Merle Haggard," a collection of Haggard songs by artists such as Joe Nichols, Randy Houser, Luke Bryan, Toby Keith, and Dierks Bentley. MORE HERE

The album release coincides with the recent announcement that Haggard will be honored with the Crystal Milestone Award at the 49th Annual Academy of Country Music Awards to commemorate Haggard’s prolific 50 years in country music.