Kiss On The Cover Of The Rolling Stone 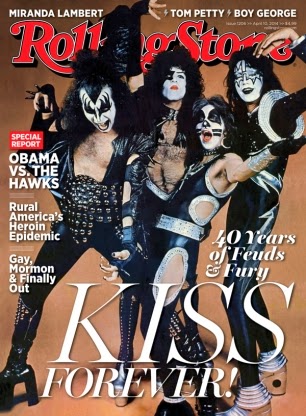 Forty years after the release of their debut album, Kiss have finally made the cover of Rolling Stone.

Marking the band's upcoming induction into the Rock n Roll Hall of Fame, the cover image is a classic 1975 photo of the band's original lineup: Paul Stanley and Gene Simmons, plus Ace Frehley and Peter Criss, who were both gone from the band by the early Eighties.

The cover story, by Rolling Stone senior writer Brian Hiatt, tells the sad, hilarious and triumphant story of one of the biggest rock bands ever, taking an in-depth look at the founding members' lives and careers. MORE HERE