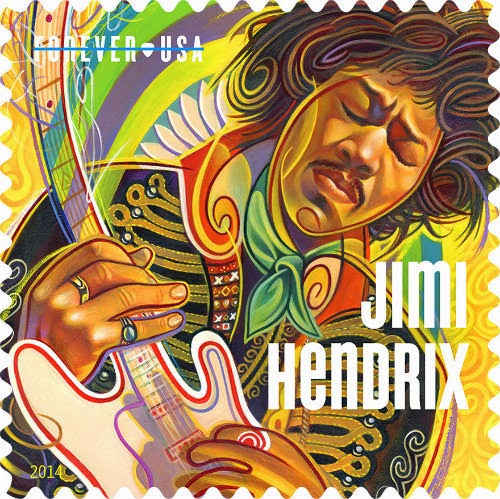 Jimi Hendrix is coming to an envelope near you.

The legendary guitarist, who died in 1970 at age 27, inspired a new limited edition Forever stamp (above) released by the U.S. Postal Service on Thursday March 13, 2014.

The colorful stamp, designed to look like a sleeve for a 45 record, shows Hendrix playing a guitar while sporting one of his signature military jackets.

The postal service launched the stamp at the South By Southwest music festival after a tribute concert for the late musician. Janie Hendrix, the guitarist's sister, was in attendance.

Hendrix is the latest musician honored by having his face on the stamp, part of the post office's Music Icons series. Last year the series honored Ray Charles, Johnny Cash and Lydia Mendoza. Later this year, the USPS will issue a stamp honoring Janis Joplin. MORE HERE

Get Yours HERE
Posted by CDMartini at 7:57 AM