Willie Nelson Will Not Perform At SeaWorld 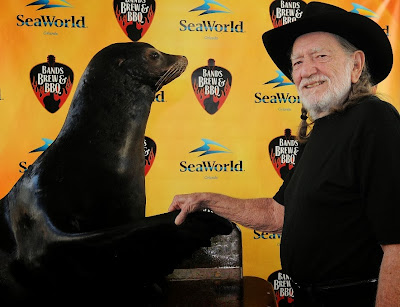 Willie Nelson said Friday that he felt he had no choice but cancel a gig at SeaWorld, given public pressure and his own conviction that the way the aquatic entertainment giant operates is not acceptable.

"I don't agree with the way they treat their animals," Nelson told CNN's Brooke Baldwin. "It wasn't that hard a deal for me."

The country music legend's comments come one day after SeaWorld Orlando spokesman Nick Gollattscheck said Nelson would not be part of next year Bands, Brew & BBQ events "due to scheduling conflicts."

But the 80-year-old crooner didn't mention scheduling having played any part in his rationale. Rather he nixed the show because he does not agree with SeaWorld's treatment of its killer whales and other sea creatures -- a sentiment that has spread among those who have seen "Blackfish", the documentary that aired on CNN on the topic. MORE HERE

He's the second defection from Bands, Brew & BBQ since the lineup was announced last month. Barenaked Ladies announced last week that they had canceled their appearance because of the controversy over the documentary "Blackfish," which is critical of the park's treatment of killer whales.

More than 9,000 people had signed an online petition on Change.Org to pull out of the concert series.

*Willie did participate in the Bands, Brew & BBQ events back in 2011 (pictured above). source
Posted by CDMartini at 11:43 AM