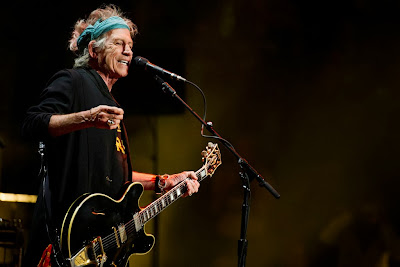 Rock 'n' roll icons should look and sound a certain way. While Rolling Stones guitarist Keith Richards — who turns 70 on December 18, 2013 — may not have taken the healthiest path to his milestone birthday, we wouldn't change a thing about what we've seen or heard out of him along the way.

From his crazy head of hair to his cracked face to the cigarette forever dangling from his lips, Richards receives his world view through eyes trimmed with black eyeliner. His music and tales of excess have inspired a legion of wannabe rock stars and his style and swagger is even evident in a modern movie pirate of the Caribbean.

Some will say, in celebration of Richards' 70th, that we should just be happy that he made it this far. We'd rather do that in 20 years or so if it means we get more music and pearls of wisdom between now and then. Let's let his own words do the talking until then...GO HERE
Posted by CDMartini at 11:54 AM

Email ThisBlogThis!Share to TwitterShare to FacebookShare to Pinterest
Labels: keith richards, pirates of the caribbean, the rolling stones