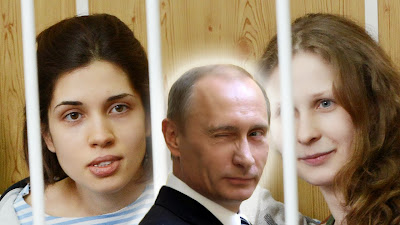 The Greenpeace "Arctic 30" could be home by Christmas (2013), and the two jailed members of the punk group Pussy Riot should be released from jail in the coming days, after a wide-ranging amnesty law was passed by the Russian parliamenton Wednesday December 18, 2013.

The Pussy Riot pair are serving a two-year sentence for "hooliganism motivated by religious hatred", while the Greenpeace activists are charged with hooliganism and are currently on bail awaiting trial in St Petersburg.

The amnesty, backed by Russia's president, Vladimir Putin, is timed to coincide with the 20th anniversary of Russia's constitution. It mainly concerns first-time offenders, minors and women with small children.

An amendment adopted Wednesday (December 18, 2013) extended the amnesty to suspects in cases of hooliganism, which includes the Arctic 30, who were arrested aboard the Greenpeace ship Arctic Sunrise in September (2013) and the two members of Pussy Riot. MORE HERE, HERE & HERE
Posted by CDMartini at 1:09 PM