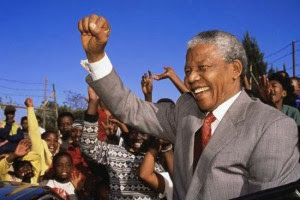 It's worth pausing to consider not only the legacy and achievements of former South African president Nelson Rolihlahla Mandela, who died Thursday December 5, 2013, but also the rich musical associations of his life.

One example:  In America in 1963, a young exiled South African trumpeter named Hugh Masekela — working with the singer Miriam Makeba, whom he married in 1965 — helped make her first hit album: An Evening With Belafonte/Makeba

. Both musicians constantly referred to the South African struggle and Mandela's plight in their performances, as in the clip of Makeba with Harry Belafonte in the 1950s, singing "Give Us Our Land (Mabayeke)." MORE HERE

Just recently U2 released a song in honor of Mandela for an upcoming biopic film of the man.

Music world reacts to the death of Nelson Mandela HERE
Posted by CDMartini at 10:35 AM

Email ThisBlogThis!Share to TwitterShare to FacebookShare to Pinterest
Labels: an evening with belafonte makeba, give us our land (mabayeke), harry belafonte, hugh masekela, miriam makeba, nelson mandela, u2